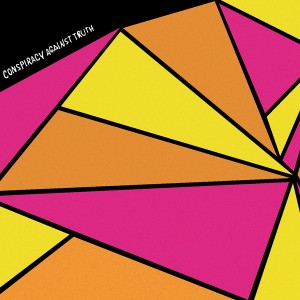 There was a time that those who played rock and roll thought about using music to express emotions and not about marketing strategies. Rock meant youth, rebellion, nonconformity, an out of control libido and, above all, honesty. To tell directly what we think, what we feel, using our own words, at all volume and not caring about the consequences. The name of the ganre changed (rock, hard rock, heavy, punk, grunge) but the music was the same, the archetype was the same, the message was yet the same, always simple, direct, al all volume and brutally honest.

If that’s the definition of rock, then rock and roll is back. Taken by the hand by a band from Argentina known as CAT, which means Conspiracy Against Truth. A curious name for a band that is not afraid of telling its truth.

Conspiracy Against Truth was formed in 2008 far from Buenos Aires, their home city. It was formed in sunny San Francisco, California, USA, when the now members of CAT went on a tour as part of other band (“a forgettable one” they claim) that broke up there. In San Francisco they experienced first hand the free spirit of Californian rock, a combination of freedom, tolerance, honesty, musical purity and above all, professionalism (California is, after all, the world capital of entertainment). That trip, that served as an initiation, lasted several months and when the bandmembers returned to Buenos Aires they had an idea in mind, that turned into a mission: to start a band in Argentina representing the spirit they found in San Francisco. It was going to be real rock and roll, simple, direct, brutal, honest and professional.

Almost three years passed, and the proof that they made it is on the table. Eternal Sunday, the Argentinean label specialized in releasing local music in English, presents Conspiracy Against Truth’s debut album, called simply as the band. Conspiracy Against Truth contains 10 powerful tracks, pure adrenaline. The album begins with the furious rock of “Sixx”, moves to the more radio-oriented “Shine” that it’s replaced by the acoustic guitars of “Could Have Been” and goes to the mid tempo “Lights Out”, that seems to be a ballad until the distorted guitars break into the chorus. “Welcome Back” has a longer intro and seems to talk about what the band found when they came back from California. “Feel The Heat” has a nonchalantly quality that makes the listener wonder if it was written on a beach. Then the love song comes (if it can be called like this), “Senior High (The Girl Of The Year)”, about a girl that seems to think she’s very important. It is followed by “Anger And Hate”, about rock favorite emotions, “Rabbit Skin”, with its classic guitar riffs and finally “Slide”, that with its six minutes and a half repeats as a mantra the verse “we’re going nowhere”. Repetition that, at this stage of the album, efficiently transmits the kind of emotions and the perception of the world experimented by any young rocker of any age, no matters if from sunny San Francisco or from humid Buenos Aires. Conspiracy Against Truth is an album that makes you feel suffocated and amazed, that it’s delicate at the same time that it’s brutal and distorted, naïve as the album cover colours and deep in its conception, that makes us free by showing us the bars of the prisons we make for ourselves.

Band influences? The ones that are expected. Classic hard rock from the 70’s like AC/ DC and Led Zeppelin, grunge/ alternative from the 90’s (Nirvana, Faith No More, Rage Against The Machine, Foo Fighters), a little electronic touch like Nine Inch Nails, all filtered through the spirit of punk rock from California, with a Hollywood professionalism. Made in Buenos Aires, Argentina, to shout from the south what the world is afraid to tell.