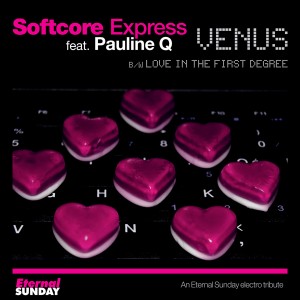 Eternal Sunday presents a new single by Softcore Express, the label’s exclusive tributes and covers makers. In this occasion they present two songs made famous in the 80’s by the girls group Bananarama, “Venus” (which itself is a cover of the 60’s, the original version was done by the Dutch band Shocking Blue) and “Love In The First Degree”.

Both songs were classic examples of the sound of legendary pop producers Stock Aitken & Waterman, whose bands and artists dominated the teen pop/ dance music scene in the UK in the mid-80s (Kylie Minogue, Dead Or Alive, Rick Astley, Bananarama, Mel & Kim, Samantha Fox among many others).

“Stock Aitken & Waterman were criticized, both by rockers and by ‘serious’ electronic musicians, because they made pop hits for teens”, says Emiliano Canal,  the label director. “But it is very difficult to come up for pop hits for teens. People not always realize this, and SAW did it worderfully for a decade or so”.

The vocals were provided by the very young and very talented Pauline Q, a 17-years old singer from Buenos Aires, Argentina, who also works as a voiceover artist for Disney and other companies. This single is her phonographic debut and, judging for the results, she’s got quite a bright future in her hands.

More cover versions are in the making! Enjoy!

5 years ago in News
Social