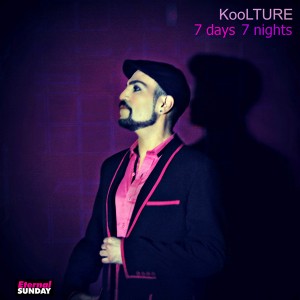 After releasing Make-Believe at the end of 2012, along with its amazing music video, KooLTURE, José Tramontini’s electropop/ dance project, adds another killer hyper catchy single to his catalog: 7 Days 7 Nights, which also features an amazing music video featuring some promising models from Buenos Aires.

The song has all the qualities that made of KooLTURE a favorite electropop performer: it’s catchy, very catchy and it tells a love story. In fact, it tells a forbidden love story, which is even better. It was produced by Ladies On Mars, who’s one of Argentina’s best electronic music producers and remixes. You can dance to it, you can celebrate to it, you can sit at home and listen to it and think about the lyrics.

The first single (remixes coming soon!) features the title track, a b-side called “Let Your Feelings Decide”, the instrumental version and, in case you want to come up with your own remix, the acapella version (that’s just the voice, no music).