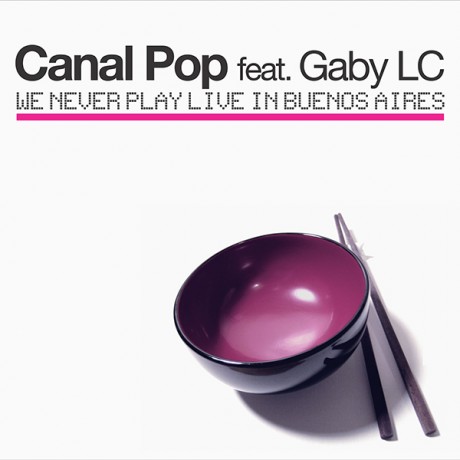 In 2006, somewhere in the city of Buenos Aires singer Gaby LC and producer Emiliano Canal, also known as Canal Pop, got together to record some songs written by the latter. The combination was a little weird: Emiliano was an electropop producer and songwriter, former member of the duo Plastic Orgasm People, while Gaby LC was a professional session vocalist with a preference for jazz, Brazilian music and 70′s funk and black music. Gaby didn’t have a wide knowledge of Emiliano’s kind of music, and vice versa. What could came of such a combination?

Magic, that’s what. Despise their differences (specially in height, Emiliano is 6′ 2” and Gaby is 5′) both of them got incredibly well, musically and personally. Gaby’s voice blended perfectly with Emiliano’s arsenal of synths and beeps, and Emiliano rewrote some songs to fit Gaby’s personality. The catchy “If You Are Like Me” is based purely on the personality of the singer. “I wrote it basically observing Gaby and the things she did”, remembers the songwriter.

As the songs were recorded they posted them on Internet, and the USA-based electropop label Section44 asked them a song for their upcoming compilation Sector One. Emiliano and Gaby chose “Cool In Japan”, a catchy, ironic song that is based on the real story that the CD’s of Plastic Orgasm People, Emiliano’s former band, sold better in Japan than in Argentina, their own country. “I felt for a while that, if everything else failed, I could always tour Japan playing my former bands’ songs, so this story about a guy who’s uncool everywhere else but doesn’t care because he’s cool in Japan just reflected what I felt” Emiliano recalls. The name of the EP is based on a line of this song.

Two more songs complete the EP, “Lonely Dance”, a story about a young girl who has a bad time at a club and “Bless The Ones”, a Moby-esque ballad with a heavy loop, a catchy melody, bouncing synths and a spiritual message. Gaby found some of the lines of this song specially difficult to sing. “I was singing for hours lines like ‘Down the street/ People walk/ They think they are moving but they’re staying at one spot’. If you think that’s easy to sing, try to do it standing next to Emiliano who was paying attention to every syllable”, Gaby complained later.

The idea was to record enough material for an album, but then Gaby accepted an unusual job: she was chosen from a group of five hundred candidates to sing on board of a transatlantic cruiser. Gaby was ending a four-years relationship with a boyfriend and had a big necessity to get away from it all. Emiliano said OK, and since she has to be on the sea for some eight months, Eternal Sunday releases now these four catchy, ironic and lovely songs. Enjoy them, they won’t be played live neither in Buenos Aires not anywhere else for a long time…