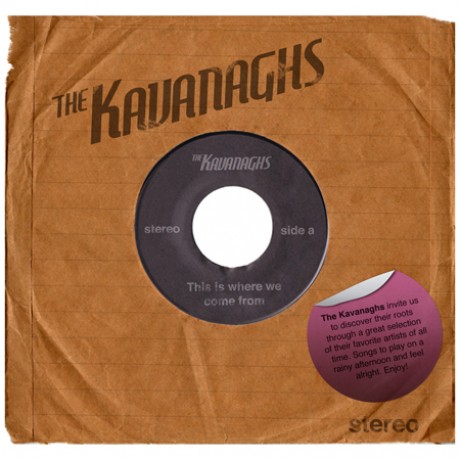 This is Where we Come From

The Kavanaghs – This Is Where We Come From

The Kavanaghs did what a lot of bands do, in a moment or another of their careers. While they were recording their second album (the follow up to their acclaimed debut The Kavanaghs) they started playing old, classic songs they loved, and one thing led to another and in a couple of weeks they had a cover album that contained eight of their favorite oldies.

These nine classic songs were recorded in a classic way. A few tracks were used, and the band did basically two takes: one for the instrumental background, another one for the vocals. They wanted to achieve the original sound and they did it. This doesn’t mean that the band has no interest in technology or in experimenting in the studio. They were paying homage to their heroes; they are experimenting enough with new sounds while recording their second album.

The songs chosen by the band say a lot about them. Being a band from Rosario, Argentina, from the year 2010, that people relate to the 60’s British invasion, they picked a list of American classic songs from the 50’s and 60’s that prove their extensive knowledge of pop music and how distinctive and unusual their influences are (for a band from their time and place of origin). These songs were recorded originally by the Beach Boys, Elvis Presley, Simon and Garfunkel, The Monkees, Neil Sedaka, and other huge names.

The (virtual) sticker placed at the (virtual) LP cover reads: “The Kavanaghs invite us to discover their roots through a great selection of their favorite artists of all time. Songs to play on a rainy afternoon and feel alright. Enjoy!”. Of course, you don’t need to wait for a rainy afternoon to enjoy this album: you’ll play it over and over as many times as these great songs deserve. A great way to spend the time while you wait for The Kavanaghs to release their second album of original songs.