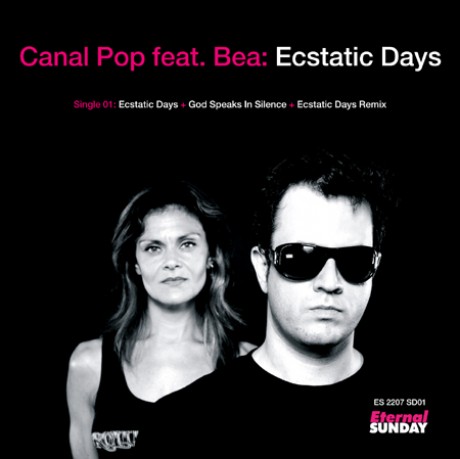 Canal Pop is the electropop project of Emiliano Canal, the music producer from Buenos Aires, Argentina, specialized in creating and releasing pop music with lyrics in English, who’s also the founder of the Eternal Sunday record label. Bea is an American singer songwriter from New York City whose mother is from Argentina. Bea is a big fan of Argentinean music herself and she regularly performs in the New York area singing (mostly) rock en español. This unique contrast (a producer from Argentina who writes in English and a singer from New York who sings in Spanish) was strange enough to make them record and release a fantastic single: “Ecstatic Days”.

“Ecstatic Days” is a hyper catchy song that was written by Emiliano Canal and the producer Sebastián “Curlie” Llobera, who currently lives in Melbourne, Australia. The song posses all the ingredients that are already characteristics of Canal Pop’s releases: catchy hooks, furious analog synth lines, carefully arranged vocals with dozens of takes and a melody that’s so catchy that it is impossible to ignore after twenty seconds.

The Single 01 also presents the B side “God Speaks In Silence” and a remix of the main song by Alfredo Norese, AKA DJ Mágico, a dance music producer from Argentina. A music video was shot and will soon be in rotation in all music channels.