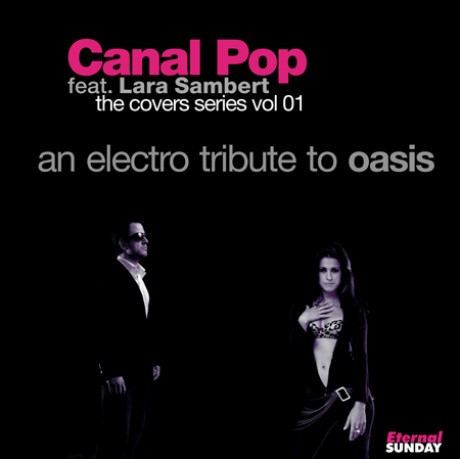 An Electro Tribute To Oasis

Eternal Sunday presents again an album by Canal Pop, the project of the producer Emiliano Canal, this time in collaboration with the sexy singer Lara Sambert: An Electro Tribute To Oasis.

It is, of course, a tribute album. But there are many kinds of tributes, and, since Eternal Sunday has a vision of releasing innovative material, this is an special tribute album. It features 12 songs (hymns?) originally recorded by the British band Oasis that were versioned with an electro/ electropop arrangement. This means with a lot of synthesizers and without a single guitar note. And sung by a girl.

The idea came from another Eternal Sunday release, Southern Waves, the Argentinean tribute to classic electropop. In that album 14 artists paid homage to the classics from the 80’s. The idea was to take, from the artists that took part in that compilation, the one that people bought the most and release an entire album by them. The biggest-selling single track from Southern Waves was (and by far) Canal Pop’s killer version of the Canadian fellows Men Without Hats’ “Pop Goes The World” that was a huge hit in Argentina in the late 80’s.

From all the bands in the world Emiliano chose (as it is his style), one of the most difficult to tribute. Oasis are huge superstars, people listened to their songs millions of times and are used to the rock-based versions, with a male voice. Canal Pop recorded them again with synthesizers and sung by a girl.

The girl is not a newcomer. She’s Lara Sambert, who had some fame in Argentina for having been, at age 19, finalist of the first edition of the reality TV show Popstars (that show led to the formation of Bandana, Argentina’s –and probably Latin America’s-biggest girl group ever). Lara has a great artistic background, for her young age. As a singer she performed in hundreds of shows, as a lead and back singer, singing pop, electronic music or whatever she was asked to sing. She also did some acting, photography, gymnastics and dance, among other things. She’s the owner of a beautiful voice, a sexy trained body and a fresh sensuality that makes them stand out onstage. It is a dream to work with someone like her, Emiliano says, she’s a star onstage, where she has to be, and a good collaborator at the studio. There are too many singers that are just the opposite, they act like stars at home but fail to transmit anything when they’re onstage.

The album was recorded and masterized at the Michael Etes studio in Buenos Aires, Argentina, and the sound is just what you expect from Canal Pop: hyper catchy songs with layers of irresistible minimalistic arrangements of analog and vintage synths, and on top of that clear vocals with carefully produced vocal arrangements. A new way of listening to the hymns of one of the most important bands of rock’s recent history.

Canal Pop and Lara Sambert are rehearsing the live shows as well as new original songs by Canal Pop from their future album together.