05/ 2012 The Kavanaghs will perform at the Culture Collide festival 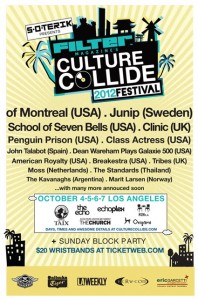 Powerpop band The Kavanaghs will perform at the 2012 edition of the Californian festival Culture Collide.

The festival is organized by the prestigious Filter Magazine and will take place on October 4-7 2012 at the Echo Park, Los Angeles, California, and besides the Argentinean band The Kavanaghs some of the collest indie bands from around the would like Of Montreal (USA), Junip (Sweden), School of Seven Bells (USA), Clinic (UK), Penguin Prison (USA), Class Actress (USA), John Talabot (Spain), Moss (Nethwelands), The Standards (Thailand) and Marit Larsen (Norway), among others.

“The Culture Collide festival has always been dedicated to bringing good music from all over the world to Los Angeles, and in our third year, we’re creating something bigger and better than ever, while still keeping it affordable to attend,” said Alan Miller, co-founder and co-publisher of FILTER Magazine. “The festival really is all about introducing people to a wide range of quality music, celebrating the cultural melting pot that this city embraces, and creating an experience like no other.”