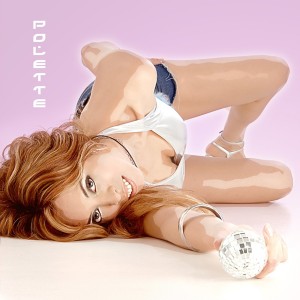 Paula Varela, AKA Polette is one of Argentina’s most important (and busiest) professional session singers. Since she was very young she started working professionally at the studio and onstage, singing vocals for jingles and albums and backing vocals for hundreds of mega stars, Canal Pop, Shakira and Deep Purple among them. She’s also a vocal coach and appeared regularly on TV.

Eternal Sunday releases, finally, Polette’s self-titled 4-tracks EP. At least two of these recordings have seen the light as part of compilations, one of them Southern Electro Originals: The Ultimate Compilation Of The Best Electropop From Argentina released by Eternal Sunday, and another one by Poley Records. But the EP in itself never went out, which was a paradox being Polette’s voice present in hundreds of other people’s records.

Polette shows us what Polette likes to do when she’s in command, a tasteful and suggestive world-class R&B/ vocal house with killer vocals and a very detail-oriented music production. Some of the best players from Argentina like Diego Rodríguez and Paul Dourge played in this EP. Three out of the four tracks are sung in English and the other one is in French, “Les Signes”, not bad for a Spanish-speaking girl.

This is Polette they way Polette likes to sound. The time has come for the world to listen.